So you all know I was headed to the Big Apple yesterday for an author visit with my niece’s school. Such a simple thing, really.  I do school visits all the time.

My plan was foolproof: put my youngest daughter on the school bus, run back to the house, grab my school visit stuff, be guilt-tripped by my faithful writing buddies (who I was about to leave home alone for many hours with only a couple visits from Grammy and Grandpa to relieve boredom and calls of nature) and head to the city with plenty of time.

You’ve probably already guessed that’s not quite what happened…!

(This is the moment when you should make sure you have a fresh cup of coffee and a little something yumptious, because I confess this post runs a little long…:))

Have I mentioned that our house is 6/10 of a mile from the bus stop, around a number of curves that make it impossible for me and the bus driver to see each other until the last minute?  This has been the situation for 13 years of bus riding, so as a result I ALWAYS call the bus when we’re not taking it so the bus driver doesn’t waste time waiting.  In return, I hope that the bus driver will give us an extra moment – the benefit of the doubt, if you will – if we happen not to be there when she pulls up.

Since I work from home, most days it doesn’t matter more than a little wasted gas if something goes awry with the bus.

Yesterday being a day when I really needed my daughter to ride the bus, I made sure we arrived at the stop on time.

(I would like to supply a photo of the empty bus-less icy road in the the driving rain here, but not knowing I was at the front end of an epic morning, I didn’t have my camera with me :))

One minute.  Two minutes.  Five minutes went by.  No bus.

Now, normally I have my cell phone with me so I can call the bus depot if there’s a question.  But yesterday, knowing I would be away from home for many hours, I wanted to make sure it was fully charged.  Hence, when I grew panicky at the five minute late mark, I groped in my pocket for my cell phone only to discover I’d left it charging on the kitchen counter 6/10 of a mile away around a number of curves…

So we waited a little more.

Now I knew I was in deep doo-doo (pardon my French!)

Back up the icy road, around the curves, 6/10 of a mile to our house.  Up the icy steps at breakneck speed. Speed dial the bus depot.  “What happened to the bus?” I asked with that very attractive high panicky pitch to my voice.

The long and the short of it was – substitute driver arrived early, didn’t read the running sheet saying call the house if we weren’t at the stop, didn’t wait until anything close to our time, and LEFT WITHOUT US!!!

So instead of my calm, foolproof plan, I raced around like a deranged chicken, grabbing my stuff, shoving it in the car, racing through a quick email to my niece’s school warning them I would most probably be late, and heading off up the icy road to my daughter’s school – which, incidentally, is in the opposite direction from the city.

About 3 miles into the 13 mile drive, we got behind a sanding truck, driving down the middle of the road, spewing salt and sand in all directions over the icy surface.  There could be no passing.  We drove a maximum of 15 mph for the remaining 10 miles while I watched the minutes tick by on the dashboard clock and tried to remain calm… not very successfully I might add.  My poor daughter…

At last she was safely at school and I could head for the city.  I was now leaving nearly 45 minutes later than I had planned to from a distance that was half an hour further away.  And the roads were still icy.  And it was still a driving downpour.  Not great conditions for making time!  (And nobody better bring up the speeding ticket incident… (s)…!)

And I didn’t even take pictures of traffic jam number three because by that time I was far too panicky!  (Although, if anyone asks, I was certainly not driving and taking pictures at the same time!)  And we won’t even mention the two cups of coffee I had in lieu of breakfast that began demanding to be acknowledged about 45 minutes into the trip!

I pulled into 90th street at 10:07, had to back up and squidge over to allow a cop car to back up past me, wasting precious moments.  On the next block, my first good luck of the day – a parking garage with vacancy!  I dashed in, grabbed my stuff, practically snatched the ticket from the parking attendant, and ran, literally ran flat out, through the driving rain to my niece’s school (although I had the foresight to tuck Phyllis and Woolliam and my other valuables under my jacket, since I did not have the foresight to grab my umbrella out of the back of the car :))

I dashed into the school, dripping wet, out of breath and, remarkably, only 12 minutes late, to find 4 first grade classes waiting patiently for me in the library.  No time to catch my breath or acknowledge that coffee – it was show time – for three straight groups in a row, from 10:12 – 11:50.

But what a beautiful library, and what a wonderful group of kids!  The morning drama was well worth it because after all that?  We had a good time 🙂 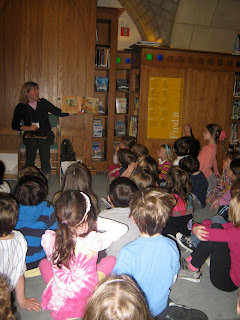 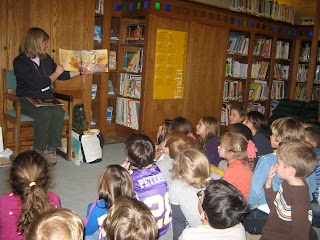 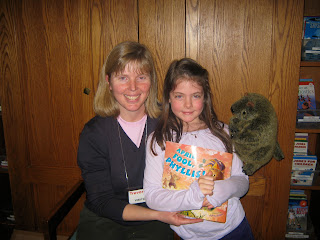 Of course, the copy of the book I had moved mountains to get in time for the visit so I could give it to my niece afterwards didn’t arrive.  (I read off the F&G, which was no easy task – as you know, F&Gs are unbound, so when you try to hold them up so everyone can see, they have a tendency to fall all over the floor.  This supplied much hilarity, however.  I explained to the third group that I had already dropped the F&G about 20 times, and halfway through reading to them, it fell once again, prompting a sharp tack in the back row to shout “21!”)

Anyway, after all the drama of getting there, the visit was such fun!

And guess what was waiting on my porch when I got home?