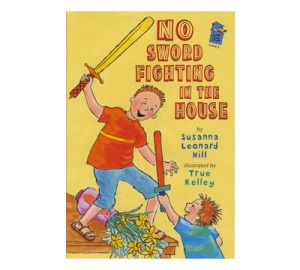 Mom is pretty clear about the rules, but Arthur and Lance have a way of bending them….

Now, Arthur and Lance are in trouble. They were sword fighting in the house. Arthur has a new idea. They can ride their cows. They can joust outside! But, oh no! What is that cow doing in Mom’s flowers?

This easy reader introduces Arthur and Lance, a pair of obstreperous brothers. Their mother hopes to win the Daffodil Days prize (a month’s supply of fertilizer) for her flowers, but when she’s out preparing, the boys break the important household rule of “no sword fighting in the house.” In the second chapter, the boys obey that rule, instead jousting on cowback in the yard – which results in bovine trampling of the contest daffodils; in the final chapter, the judge, keen to unload the fertilizer, concocts a “most room for improvement” prize for the boys’ mother’s garden, and the spreading of the award is the boys’ punishment. Some of the jokes and vocabulary require a fairly high comfort level with the printed word, but readers will revel at the sardonic and absurd wit mustered in the spare prose (“I’m all a-twitter,” says a deadpan Dad about the prospect of Daffodil Days); chivalry-inclined youngsters will note that the whole thing is a modern-day romp of Arthuriana, between Dad’s hard work up at the castle, the boys’ taste for swordplay and jousting, and of course, the names, including that of their neighbor, Gwenn. Kelley’s line-and-watercolor illustrations are poker-faced about the knighthood joke, making the scenes determinedly ordinary depictions of a rowdy pair of country kids and offering a broadly comedic complement to the text. With its combination of mayhem and dimensionality, this may appeal to older reluctant readers as well, and novices will find the silliness ample reward for their perseverance.

From The Bulletin of the Center For Children’s Books, March 2007

Mom dreams of winning a prize for her daffodils from the Camelot Ladies Garden Club. But her sons, Arthur and Lance, dash her hopes by getting into one scrape after another as they entertain themselves while she is out of the house. After the stern warning, “No sword fighting in the house!” they take their knightly adventures outside, where they attempt to joust, substituting cows for horses. Unfortunately, their not-so-noble steers prefer eating juicy daffodils to combat practice. What can Arthur, Lance, and their friend Gwenn do to rescue the floral display before the judges arrive? The tongue-in-cheek tribute to King Arthur and the Knights of the Round Table is balanced by the colorful illustrations depicting a modern-day farm setting. Clever word play and pointed humor add an extra layer of sophistication to this Level 2 early reader that shows actions have consequences, and cooperation saves the day.

Arthur and Lance love to play with their swords in the house. But Mom, even when conveniently distracted by the upcoming garden club show, is adamantly opposed to the activity. When she leaves the boys for the day, they find other things to do, like jousting atop cows in their mother’s prize daffodil beds. Snappy family conversation, complete with sarcastic witticisms, may fly right over the head of the intended audience for this reader, but it will ring true for the adult sitting and helping sound out words. Sunny ink-and-acrylic illustrations keep the story as light and humorous as the situations the boys get themselves into. And, in the end, when they replace their swords and lances with manure shovels, readers will smile with understanding. Three quick-paced chapters for the reader just on the verge of real chapter books make this a quick and amusing read. And that’s just the point. (Easy reader. 4-7)