I love visiting schools.  Sharing my stories with the kids I write them for is a privilege.  Letting them see that authors are regular people, and encouraging them to pursue their own creativity in whatever form it may take, hopefully helps them believe that they, too, can be authors, illustrators, sculptors, musicians, or whatever their hearts desire.

For me it’s been a work in progress, though.  I am not, by nature, the kind of person who wants to draw attention to herself, or who feels like she has any right standing up before a roomful of people and trying to impart anything.  I don’t know about you, but the first time I had to face a roomful of kindergartners I was TERRIFIED!  You think I’m joking?  Uh-uh!  I was so nervous my teeth were literally chattering.  I had to clench my jaw to keep them still, and even that was uphill work.  And let me tell you, it’s pretty hard to talk normally with your jaw clenched 🙂

Eight years and uncountable school visits later, it has gotten easier.  I still shake when I have to address adults (and I’ve got 2 of those gigs coming up the first week of April!) but I have reached a point where I truly enjoy visiting with kids.

I have discovered that there is a fine line between having them really engaged and all-out mayhem, and that line is a tricky one to walk with large groups of 5 and 6 year olds!  But I love that they are so enthusiastic that they all want to chime in.  There isn’t much that’s more fun for an author than having 60 kindergartners laughing so hard they’re practically rolling on the floor (well, in some cases they actually are rolling on the floor!) or unabashedly joining in on an April Fools song they’ve never heard before but are perfectly willing to sing along with.  I wish I had a recording of them from Wednesday!

I try my best to make school visits fun and interactive for kids.  I remember being in a classroom when I was little.  There’s not much that’s more boring than having someone talk AT you.  So I have Phyllis and Woolliam/Baab – my puppets – who can always be counted on to be more entertaining than I am 🙂  I ask the kids a lot of questions so they get a chance to talk.  I make up songs related to the stories (songs that are always performed by the puppets – not me!) and encourage the kids to join in.  I show them the various steps to an idea becoming a picture book, tailoring the amount of detail to the age and interest of the audience.  I wish I could draw.  I think illustrators have a big leg up on authors because they can create something in front of the crowd.  The kids think they are magic!  But alas, for me a stick figure is about as artistic as I get.

But I am always open to new ideas.  I know there are other authors who read this blog, as well as teachers and parents.  What do you do on school visits?  Or what do you think would be fun and entertaining for the 4-8 year old crowd? 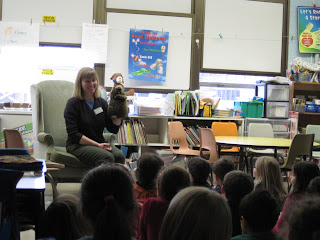