I hope you’re all revved up and rarin’ to go this morning, because we’re going to have all kinds of fun.  If you’re not revved up yet, you will be after this! 🙂

First:  today my blog is being critiqued by the awesome and wonderful Laura Barnes over at Laura B Writer.  She’s running a series of blog critiques to help us all learn how to do things better, and I’m the second to go.  Her blog, in general, is a font of valuable information about marketing and how we, as writers, can make the most of our presence on the web.  Please check out her blog if you haven’t – you’ll be glad you did!

Second:  my friend, Catherine Johnson over at Catherine Johnson, Writer, was kind enough to send me her copy of The Preacher’s Bride by Jody Hedlund because she knew I wanted to read it.  (It’s historical romance.)  I thought it would be fun to make it into a Book’s Journey.  Catherine made a page that goes in the front and put her name, where she’s from, and the date she read the book, and then she sent it to me.  Now I have done the same and would like to send it on.  Eventually, we’ll send it back to Jody and she’ll have a copy of her book that’s gone (hopefully!) all over the world!  So – first come, first served!  Whoever is first to say in the comments that they’d like to read The Preacher’s Bride will get it.  The only requirement is that you play along with the game and when you’re done, pass it on to someone else 🙂

In addition, since I thought up this idea, I thought it would be fun to do with one of my own books, so first I’ll take a vote as to which book to send (poll open for a week, from now until midnight October 24th) and then I will circulate one of my books for the same fun!  Only I want mine signed directly in the book so I can eventually bring it on school visits and show the kids where it has been!  So, please vote below for which book I should send on a journey 🙂

&amp;lt;a href=”http://polldaddy.com/poll/5590405/”&amp;gt;Pick A Book For A Book’s Journey!&amp;lt;/a&amp;gt;
Third:  this week’s theme for Fun Friday Foto Fextravaganza (which I hope you are REALLY impressed that I’m remembering to post today instead of forgetting until Wednesday :)) is PUMPKINS/JACK O’LANTERNS!

Fourth:  I hope you’re all getting excited for the Choose Your Own Adventure Bloghop next Monday, October 24th!!! 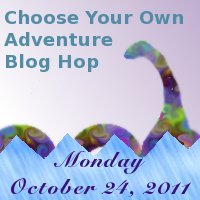 Fifth:  (I told you there was all kinds of stuff going on today!)  I spent the weekend at the New York State Sheep and Wool Festival.  Really, if you’ve never been to such a thing, you owe it to yourself to go.  Sheep, llamas, alpacas, gorgeous wool, knitting and crochet meetings and books and patterns and products – WOW.  It’s a whole world I knew nothing about and it makes for a lot of fun!

Anyway, there I was, signing copies of Can’t Sleep Without Sheep, when a woman came up to me and asked me to sign one for her daughter.  “How old is she?” I asked, pulling a book from the pile and uncapping my pen.  “Well,” said the woman, “she was just born a couple days ago.  She was premature, so she’s in the NICU, but she’s going to be fine.”  But here’s the kicker.  The woman went on to say, “This will be her very first book.”

Can you believe it?  I was so honored!  To think something I wrote was going to be the very first book in this child’s library; that one of these days, that mother will sit with her little daughter and read Can’t Sleep Without Sheep to her.  How special is that?!  I am tucking this one away for those moments when I’m afraid my career is over and I’ll never sell another story (well, that would be right about now!) so I can pull it out and look at it and remember something good.

And finally, the moment you’ve been waiting for! STRAIGHT FROM THE EDITOR!

To remind you, our September winner was Aimee.  Her pitch was as follows:

Here are my thoughts about your pitch: It is a little confusing. “Talking to herself-in-twelve-years” doesn’t quite get across the idea that she’s talking to herself in the future. I had to read it a few times to get that. You might want to just say her future self. Also, is the relationship impossible because nobody can talk to themselves in the future or because she doesn’t get along with herself? I don’t think you want to use that word impossible. Perhaps just go with relationship. Keeps it simple and to the point.  Also, “fueling her destructive self-loathing” leads to more questions and could possibly turn an editor off. It might be better to give the resolution so that the editor might be intrigued as to how it happens. See what I’ve done. Do you think it gets the main point of the story across? If not, then you need to rework it so that it does. Perhaps be more specific than bullying or unrequited love.
Lastly, fyi, there is a young adult novel coming out in November by Jay Asher and Printz Honor-winning author Carolyn Mackler — THE FUTURE OF US, in which two best friends log onto AOL in 1996 and discover a window to their future Facebook selves. Razorbill is publishing it. It sounds very similar to yours and I just wanted you to know it was out there.

I hope you all find Erin’s comments as interesting and insightful as I do.  Not only does she bring her experience as a career editor, but she knows what else is out there.

So, are you feeling revved up and rarin’ to go for your week now?

OK.  But just one!  These are pumpkin, BTW, in keeping with this week’s FFFF theme 🙂

25 thoughts on “Straight From The Editor! #2 And Then Some”