Fasten your seat belts, boys and girls!  We’ve got quite the agenda today!  I recommend packing a lunch.  I’d be happy to make it for you.  I am an absolute whiz with peanut butter and jelly.  I can make it in myriad ways – all delicious, if I do say so myself.  Creamy peanut butter, or crunchy? White, wheat, rye, pumpernickel, or raisin bread (that’s how my sister’s family likes it – on raisin bread!), or bagel, English muffin, hard roll, or baguette?  Grape, strawberry, apricot, raspberry, or blackberry jam?  Or would you prefer peanut butter and honey?  Or peanut butter and bananas?  And would you like it regular, or grilled panini style?

And you guys thought I couldn’t cook!

I had a point…

We have a lot to do today so stop talking about peanut butter and jelly and let’s get down to brass tacks!

We’ve got an entire education in pitching today: Straight From The Editor for January, February, March, and April!

So let’s dive in, shall we?

You will recall that the January Pitch Pick was won by Costantia with her PB pitch for Understanding George:

George has ASD (Autism Spectrum Disorder) and doesn’t behave or react like the other children in his class. When he is unable to play with them, the children are left upset, and struggle to understand what makes George so different. Seeing the world from his perspective helps them to empathize with the challenges that ASD children face daily, and to accept that everyone is unique.

Definitely a book that is needed in this day and age! I would suggest, however, to make it less textbook-y or institutional, to pick one example and build off that. If you started out with: George has ASD (Autism Spectrum Disorder) and doesn’t behave or react like the other children in his class. But then perhaps go into an empathy example next, so say something like: When teacher gave all the children blank masks and they were to act out an emotion without saying anything, they realized how different and even difficult George might find an interaction that they take for granted. (or some other exercise that can be described briefly). And then wrap it up with a line like: Stepping into George’s shoes helps his classmates understand the challenges that ASD may face and to learn to accept each student and their uniqueness…

The February Pitch Pick was won by Kathryn with her MG pitch for Penelope Pickles And the Troll Kingdom:

Toadstool is a troll who just wants to be left alone. But the Troll Kingdom is relying on him to start a plague in order to ward off pesky humans. His plan goes amiss when he meets Penny, a spunky girl with a contagious imagination. The Troll Kingdom isn’t happy about his new friend, and Toadstool soon finds himself having to choose between saving the Troll Kingdom or saving Penny.

The conflict sounds fab. But must Toadstool choose between saving the Trolls or Penny or—since the trolls don’t like Penny (or humans, in general), it sounds like it’s more a matter that he must choose to save himself or Penny. If that is not the case, then what is going after the trolls that Toadstool must save them from? Or is it that he must choose the Trolls over Penny—one or the other? If that’s the case, then I would reword the last line slightly: Toadstool soon finds himself having to choose between becoming an important member of the Troll Kingdom, or saving his friend Penny from certain doom. You just need to clarify the conflict and address it and then this will have a much better shot. I would also use the word awry, rather than amiss, because it seems more appropriate for what you are trying to say,

The March Pitch Pick was won by Traci with her PB pitch for Riley And The Haunted Cupboard:

What started out as a fun game of candy hide and seek between Riley and his dog, Scout, turns hairy when creepy noises coming from the cupboard under the stairs halts the game. Scout seems to be missing which forces Riley to first face his fear of dark places but more importantly face his fear that Scout may be gone forever.

Question—is this book about a boy and his dog and the boy overcoming his fears of the dark and unknown noises to “rescue” his best friend? Or is it about a overcoming the sadness about a dog dying? If it’s more about being brave for someone you love (and the sounds are that Scout is trapped in the cupboard,  then I would eliminate the bit about him facing a fear that Scout may be gone forever. Otherwise it seems like two separate stories. If it IS about dealing with a dog’s death by overcoming fears of a cupboard, then I’d rework the beginning because it makes it seem trivial and happening so fast with the candy hide and seek…

Especially in a picture book, you need to stay linear and keep to one conflict and resolution.

And finally, the April Pitch Pick was won by Ana with her PB pitch for No More Cats!:

When Lilly’s dad agrees to adopt a cat, he thinks one will suffice. But now Lilly seems to be on a mission to rescue every stray she encounters; a calico evading traffic, a kitten rummaging through trash, a tabby outrunning a dog. One by one the cat count rises while the number of potted plants and dad’s patience decreases. Together they must find new homes for their furry friends to make life sane again.

This premise is all too real for me, as my daughter is constantly sending me pictures or sad stories about cats—and we already have three in our two bedroom apartment! Anyway. This is sounding good, but I am imagining that it will be humorous because you’ve got that somewhat in your descriptions of how Lilly finds the strays, but you need to end with something more lighthearted–to catch an editor who doesn’t have my particular sympathy J. Maybe something simple, like: As the cat count increases in her house, dad’s patience decreases and they seek to find her furry friends forever homes with relatives or neighbors…

Many, many thanks to Erin, whose comments I always find so interesting and enlightening, as I hope you do too!  And many thanks to all our pitchers for giving us the opportunity to learn from each other and from Erin!

I’m a little exhausted from all that learning, though, so how about a Something Chocolate snack break?  Today (in a complete departure from the aforementioned peanut butter and jelly) I am serving Brown Butter Walnut Brownies! 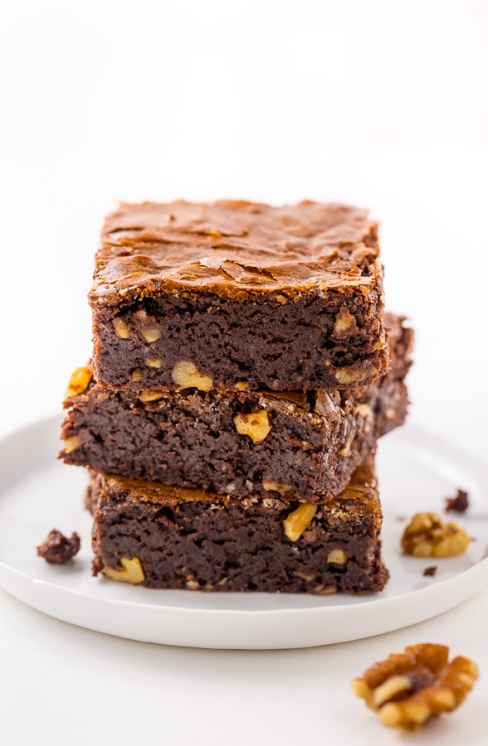 Recipe HERE at Baker By Nature

Ah!  That hit the spot, didn’t it?  I hope you’re feeling refreshed! 🙂

Now then, onto today’s pitch which comes to us from Suzie Olsen who is a systems engineer in Phoenix, AZ. Her passion is to encourage students, especially girls and minorities, to consider careers in science, technology, engineering, and math (STEM). She is a member of the Society of Children Book Writers and Illustrators, 12×12 Challenge, as well as the Society of Women Engineers. She lives with her husband and son, reading book after book to her son.

Find her on the web at:

Here is her pitch:

The Pitch: Gracie Gopher is an IT Specialist for Ground City; Chief Infrastructure Tunnel specialist that is. She is helping Ground City set up and build their tunnel infrastructure.  Gracie loves the problem solving that comes with her job. There seems to be a problem of water getting blocked in the drainage tunnel.  Gracie goes down there to troubleshoot and finds a bug.  The bug won’t move, so Gracie has to come up with a solution on the fly.

So what do you think?  Would You Read It?  YES, MAYBE or NO?

If your answer is YES, please feel free to tell us what you particularly liked and why the pitch piqued your interest.  If your answer is MAYBE or NO, please feel free to tell us what you think could be better in the spirit of helping Suzie improve her pitch.  Helpful examples of possible alternate wordings are welcome.  (However, I must ask that comments be constructive and respectful.  I reserve the right not to publish comments that are mean because that is not what this is about.)

Please send YOUR pitches for the coming weeks!  For rules and where to submit, click on this link Would You Read It or on Would You Read It in the dropdown under For Writers in the bar above.  There are openings in June, so you have a little time to polish your pitch before putting it up for helpful feedback and have a chance to have it read by editor Erin Molta!

Suzie is looking forward to your thoughts on her pitch!  I am looking forward to experimenting with that Brownie recipe!  I’m going to leave the walnuts out.  I don’t like walnuts… they’re bitter… and it is my personal opinion that nuts of any kind should not be allowed anywhere near brownie batter.  Chocolate chunks? fine.  Peanut butter chips? fine.  Crushed peppermint (at Christmas) or toffee (anytime 🙂 ), fine!  But NO NUTS! 🙂

Have a wonderful Wednesday everyone!!! 🙂