(Try to imagine that was royal trumpets! 🙂 )

Because it’s time for another Tuesday Debut – the thrilling new series where you get the inside scoop on how pre-published picture book writers became Published Picture Book AUTHORS!

What could be better?!

After dipping our toe into the Tuesday Debut experience a month ago with Christy Mihaly, we are now going full steam ahead with a new debut every Tuesday for the next 9 weeks (minus a week or two while Halloweensie is running and pre-empting all regular programming on this blog)!

And let me take this opportunity to say that if YOU have a debut picture book coming out and you’d like to be center stage here, sing out!  If the date’s free it’s yours!

Let’s have a round of applause for today’s lovely debutee (is that a word? n. one who debuts? Let’s make it a word!  Pronounce it day-bew-tay – it sounds more accomplished and French that way 🙂 ) 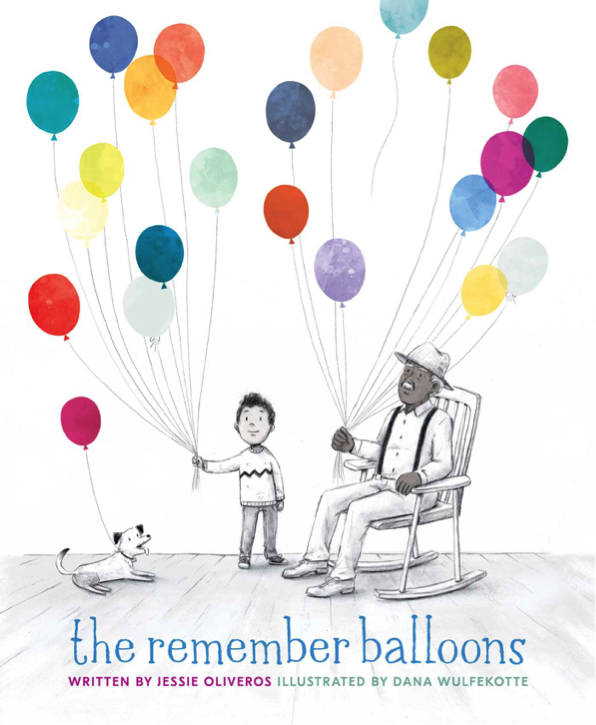 James and Grandpa keep their memories in balloons, and James loves to hear all of Grandpa’s stories. When Grandpa’s balloons begin to float away, James tries to catch them—but he can’t. He must discover another way to reclaim Grandpa’s balloons.

JESSIE: THE REMEMBER BALLOONS was inspired by my paternal grandfather who has Alzheimer’s. A few summers ago, while visiting my grandparents in Kansas with my children, my thoughts turned to writing a picture book. I only knew that it would be about a boy and his grandfather suffering from Alzheimer’s. I started out writing a straight forward story. I can’t say exactly when the metaphorical angle came to me. I knew balloons would be an accessible idea for children. And, when I was visiting my grandparents, I had recorded some of their histories on a voice recorder. This made their memories more of a tangible thing for me, I think. Plus, there was that act of capturing their memories before they were no longer with us. All of these things came together, and the THE REMEMBER BALLOONS was born.

(Also, one of my favorite methods of idea-seeking is to mash two unlikely ideas together, which I think my brain did out of habit when I thought of balloons while also contemplating memories.)

JESSIE: Once the idea of the memory balloons came to me, this story flowed fairly quickly. I had a cohesive draft in an afternoon. I definitely cannot say that about all of my picture book manuscripts! When I get an idea, I typically let it form in my mind for awhile before writing anything down. Sometimes it takes a ridiculous amount of drafts to make it a cohesive story. And that’s before any real revisions!

JESSIE: THE REMEMBER BALLOONS went through my own revisions before I felt it was ready for other eyes. I sent it to a trusted critique partner and implemented her feedback. It may have been about ten revisions before my agent saw it. Once he had his hands on it, the revision process had just begun!

I advise letting a manuscript sit for awhile and coming back to it. You see things a little differently with the passage of time.

SUSANNA: When did you know your manuscript was ready for submission?

JESSIE: Well, when I send a child off to kindergarten, I know she’s ready. She’s been at home for five years and is itching to get out (even if there are some tears). I’ve dressed her in nice clothes, brushed her hair, & packed her bag and lunch. She’s ready for the world.

I guess it’s that way with your manuscript. You know you’ve done your best. It’s itching to get out. You feel it’s ready for the world. (There I go speaking in metaphors again.)

SUSANNA: When and how did you submit?

JESSIE: I submitted to about 12 agents before I found my agent. I had just finished querying a middle grade very widely, and I was a little burnt out. So, I went much slower this time. Plus, there was a bit of a personal stamp on this one which I think made me more careful with my “baby.”

I entered a Twitter Pitch contest the Friday before Christmas (#pitchmas). I pitched THE REMEMBER BALLOONS. My agent, Mike Hoogland of Dystel, Goderich, & Bourret, “liked” my pitch. I sent him my manuscript the next day. Monday, Mike contacted me via email. Tuesday we were on the phone talking representation. (BEST CHRISTMAS PRESENT EVER.) This all happened fast, but the process leading up to it was several years!

SUSANNA: When did you get “the call”?  (Best moment ever! 🙂 )
JESSIE: The manuscript was picked up about a month after we started subbing. This is quick—but I truly believe it’s all about landing on the right desk at the right time. I’ve subbed out more manuscripts since then, and it’s usually a months-long process! Fun story: I received the offer for THE REMEMBER BALLOONS the day after I brought my fourth baby home from the hospital (and we’d just closed on a house—ha!). It was a very full few days. I knew Simon and Schuster had been considering it, but I still had the surreal, heart-dropping moment when I read the email from Mike.

SUSANNA: How did you celebrate signing your contract?
JESSIE: I actually received my contract on my birthday! Ha! I didn’t do any special signing pictures or anything, but it was a bit of a dual celebration. Interesting fact: there is a delay between offer and contract signing. Mine was about two months. Offer in March. Contract in May.

SUSANNA: Was the contract what you expected in terms of advance, royalty percentage, publication timeline, author copies etc.?
JESSIE: I didn’t know what to expect! I did a lot of internet research on the terms, and I had a good agent to answer all of the questions. I would say that the terms were better than I could have hoped for for a debut author.

SUSANNA: Tell us about the editorial process…

JESSIE: I edited the manuscript with my acquiring editor, Christian, before he switched houses. He helped me hone the manuscript into what it is today. The structure of it remains close to the original. But Christian helped me dig deeper into the manuscript—most notably, he encouraged me to find James’ voice and to re-examine the silver balloon. He helped give it breath!

After that, Justin took on THE REMEMBER BALLOONS. He helped me pare it down some. We cut unnecessary phrasing as well as parts that were redundant with the illustrations.

I feel so lucky to have worked with both these editors—both great, visionary people and positive forces in children’s publishing.

SUSANNA: Can you share your experience of the illustration process?
JESSIE: When I first saw the sketches, I was very happy with the look and style. The people that Dana drew were actually very similar to how I had envisioned them as I drafted—sweet, sketchy, dreamy. I saw the sketches and art at several stages along the way. The combined visions of Lucy, the art director for THE REMEMBER BALLOONS, and Dana really superseded anything I could have ever dreamed of myself. There were a few things I suggested, tweaks really. I asked that a berry basket be added to the yellow balloon memory, for instance. I felt my input was listened to and taken seriously. But I mean, just look at the art. 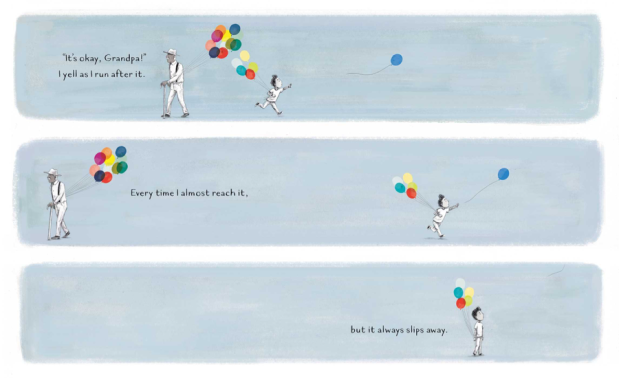 SUSANNA: Did you get to see advance reviews from Kirkus, SLJ, etc?  What was that like?

JESSIE: The trade reviews for THE REMEMBER BALLOONS was sent to Dana and me in advance. That means we had to hold in the news of our Kirkus star before sharing it on social media! One thing I didn’t know before that I know now—your editor may send all the trade reviewers your book, but that doesn’t mean they are all going to review it.

SUSANNA: How long did it take from offer to having the first copy in your hand?

JESSIE: As I mentioned earlier, my baby was only a few days old when I received an offer. She’s 2 ½ now! I didn’t expect it to take that long, but those 2 ½ years were full. There is a lot of behind-the-scenes work going on to design and promote the book. It takes a lot of time, and I think it was worth it!

JESSIE: My book just released a few weeks ago so I’m a longways off from that!
SUSANNA: Describe any marketing/promotion you did for this book.

JESSIE: I’ve used social media quite a bit to promote my book. I’ve done a few interviews like this. I’m about to have launch events in two different cities. Honestly, I think the best thing for your book is word of mouth! I had a friend tell me the other day that her friend had seen someone talking about my book on Instagram. Being that many degrees removed from it felt pretty awesome!

JESSIE: I started writing seriously when my son was two. 7 ½ years later I sold my picture book! That’s ten years from outset of journey to actual book.

JESSIE: This journey, like life, is unpredictable. It’s filled with mountains and cliffs and valleys. One thing I’ve learned (and am still learning!) is to step outside of it. Don’t let the rejections and the bad reviews cast a shadow over the things and people that give you joy.

That is wonderful advice, Jessie!  Many thanks for joining us today and sharing your knowledge with us.  You are the second author in a row to point out that your first sale was many years in the making.  I hope everyone feels buoyed up by the knowledge that, if you’re feeling discouraged because it’s taking you awhile to get published, this is a marathon, not a sprint for ALL of us in the picture book world.  And though it may be taking more time than we’d like to cross the finish line, at least we’re surrounded by friends all the way ❤

If you have questions for Jessie, you may ask them in the comment section and if she has time she may be able to answer 🙂

Thank you all for joining today’s debut!  And maybe there’s someone in your life who would enjoy a copy of THE REMEMBER BALLOONS… 🙂