Welcome to the first Tuesday Debut of March!

Even though we just had a huge snowstorm and are now expecting days of temperatures in the single digits or worse, March holds the promise of spring!  Even if it’s only teasing 🙂

Welcome, Margaret, and congratulations on your villainous debut! 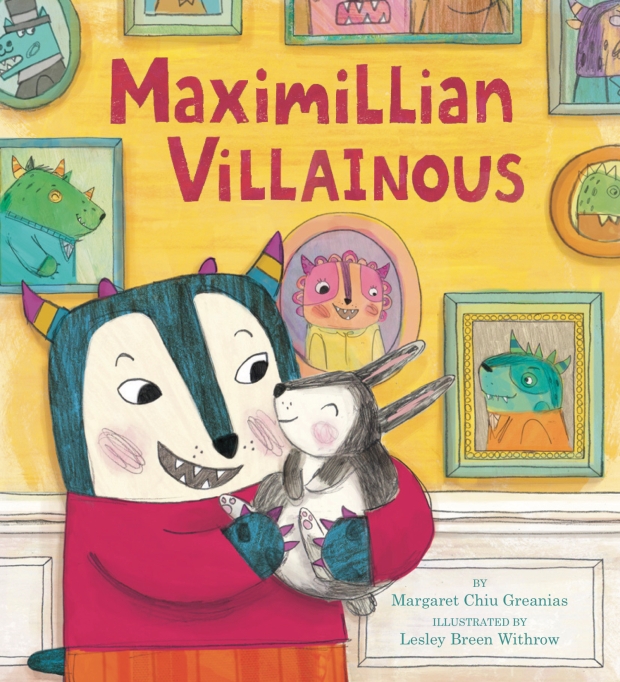 Synopsis: Maximillian Villainous doesn’t have the heart to be a villain, even though he comes from a long line of famous villains. When he brings home a bunny to be his sidekick, his disapproving mother challenges him and the bunny to become a devious duo… otherwise, the bunny hops.

MARGARET: The idea for “Maximillian Villainous” came from my kids watching the movie, “Despicable Me.” They were enamored with the characters, and I loved how fun and creative villains could be—the freeze rays, the fart guns, the shrinking down and stealing of landmarks, etc. At the time, I couldn’t recall a picture book about villains. Once I decided my characters would be villains, I gave the main character a quality that would lead to a natural conflict—in this case, having a heart of gold. From there, I chose a problem that would be exacerbated by this quality.

MARGARET: The first draft came relatively fast. However, less than 10% of the words from the first draft made it into the version that was eventually acquired. Ultimately, it took one year and nine months (revising on and off) to get to submission-ready.

MARGARET: I knew from the start that this story might be “the one” for me. People seemed enthusiastic about it and it felt lively and fun. However, something about it wasn’t right (turns out multiple somethings). It took over 30 revisions, including a few complete re-writes, one freelance editor, an agent critique, and an editor workshop to finally get it to submission-ready.

SUSANNA: Wow!  That was a lot of hard work!  When did you know your manuscript was ready for submission?
MARGARET: It was after I took an editor workshop through SCBWI mid-South. The format was ideal—the editor critiqued our manuscripts, and then we had the chance to revise for another critique. I did almost a full re-write based on the editor’s first critique and tweaked again based on her second critique. It really helped me to follow the feedback from one trusted source—at that point, I had had so many critiques, and they sometimes conflicted (not everyone shares the same vision for a text), which was hard. I now know to delve deeper into the comments and determine why particular feedback was given. After that workshop, the story just felt ready—there was nothing else I wanted to change.

SUSANNA: That is a good point about multiple critiques – it can get confusing – and good advice about having a single trusted source.  When and how did you submit?

MARGARET: Like many others, I began querying too early. I queried in a mish-mosh of ways—testing the waters through contests, twitter pitches, conference submissions, 12×12 submissions, etc. For the query round that got my agent, I cold queried.

MARGARET: It took about three months for us to get an offer on the story—but even though my manuscript was ready, it wasn’t until six months after I signed with my agent at the time that we went on submission. So patience was important!

My agent thought that I, as a debut, would have better odds if we submitted with an illustrated dummy. We picked the wonderful Lesley Breen Withrow as the illustrator. She has a very bright and happy style to balance my manuscript which was a bit darker. Once she finished the rough dummy, we went on submission and got an offer within 3 months. 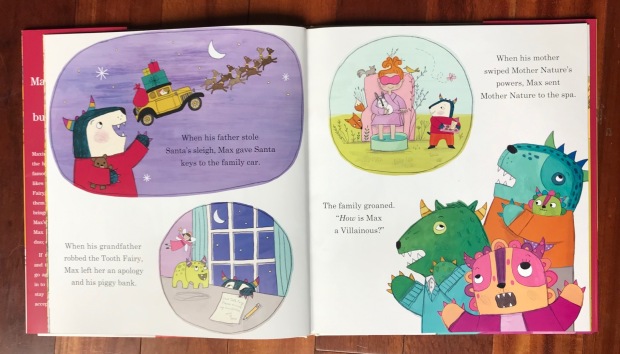 SUSANNA: How did you celebrate signing your contract?
MARGARET: Of course, I squealed and danced when I first heard we got an offer. After I signed the contract, one of my dearest critique partners arranged an amazing celebration including old and current critique group members (we’d been in a group for 5 years at this point). It was a very sweet way to celebrate.

SUSANNA: That does sound nice!  Was the contract what you expected in terms of advance, royalty percentage, publication timeline, author copies etc.?

MARGARET: I didn’t know what to expect, but I was happy with what my agent negotiated for me.

SUSANNA: What was the editorial process like for you?

MARGARET: We did two rounds of revisions, and my manuscript was definitely better for it. Many changes had to do with simplifying my text so it would be easier for young children to understand. My editor also made a suggestion which helped give the story that “aww” ending.

SUSANNA: Can you tell us a little about your experience of the illustration process?

MARGARET: I did get to see the illustrations just before they were finalized. My editor was really great about sharing, asking my opinion, and bringing it back to the team. I tried to limit my suggestions to a few, and while they didn’t use all of them, I felt like my opinion was valued.

Also, because Lesley was on board before the story was submitted to publishers, I had a say in the how the characters were illustrated (which may not have been ideal since I didn’t have a strong vision for how Max and his family should appear). In my opinion, the strength of having a separate illustrator is their interpretation and vision of the text. I had vaguely envisioned the characters being human, and they ended up being monsters, which I LOVE! 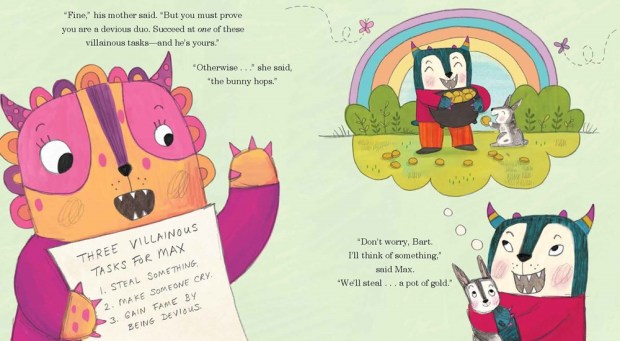 SUSANNA: Did you get to see advance reviews from Kirkus, SLJ, etc?

MARGARET: My editor sent me advance copies of SLJ and Booklist reviews, which was very nice.

The Publishers Weekly review was unexpected. But it was the first review to come out and I was so relieved when I saw it.

My book didn’t get a review from Kirkus…maybe that was lucky?

SUSANNA: Maybe that was lucky! A lot of people seem to have had less than flattering reviews from Kirkus 🙂 How long did it take from offer to having the first copy in your hand?

MARGARET: About 1 year and 8 months which is very quick—but we had Lesley lined up plus a dummy already made.

MARGARET: I haven’t gotten a statement yet.

SUSANNA: What kind of marketing and promotion has your publisher done for this book?

MARGARET: Some examples of marketing and promotion that my publisher did included sending review copies to major trade publications and sending pitches to other media including bloggers and instagrammers.

SUSANNA: Describe any marketing/promotion you did for this book.

MARGARET: By far, the best marketing/promotion I did for my book (and my sanity) was to join a debut group, the Epic 18’s. I learned so much from the other debut authors, especially those whose books launched before mine. I found it very valuable to have this peer community for advice and moral support.

Other marketing/promotion I did:

This year, I’m starting to schedule school visits and will be at a local book festival in a couple of months. 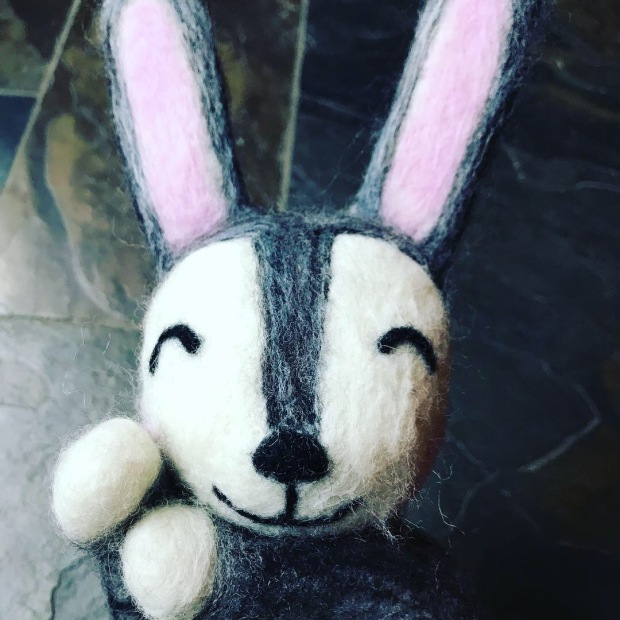 Puppet Margaret made of the bunny character from her book to take on school visits!

SUSANNA: How long was it between the time you started writing seriously and the time you sold your first picture book?
MARGARET: About 5.5 years.
SUSANNA: Margaret, thank you so much for taking the time to participate in this series and paying it forward to other writers! We all so appreciate you being here today!

Readers, if you have questions for Margaret, please post them in the comments below and if she has time I’m sure she’ll respond!

You may purchase Margaret’s book at:
(all links below are book-specific)

We can help our debut authors successfully launch their careers by:

– recommending their books to friends and family

– recommending their books to our children’s teachers and librarians

– recommending their books to our local libraries and bookstores

– sharing their books on social media

– reviewing their books on Goodreads, Amazon, Barnes&Noble, and other sites where people go to learn about books.

Thank you all for stopping by to read today!  Have a lovely, inspiration-filled Tuesday!  Maybe today is the day you’ll write your debut picture book 🙂

Missed any previous Tuesday Debuts?  Check them out!

Christy Mihaly – Hey! Hey! Hay! A Tale of Bales And The Machines That Make Them

Hannah Holt – The Diamond And The Boy

Annie Romano – Before You Sleep: A Bedtime Book Of Gratitude

Natalee Creech – When Day Is Done